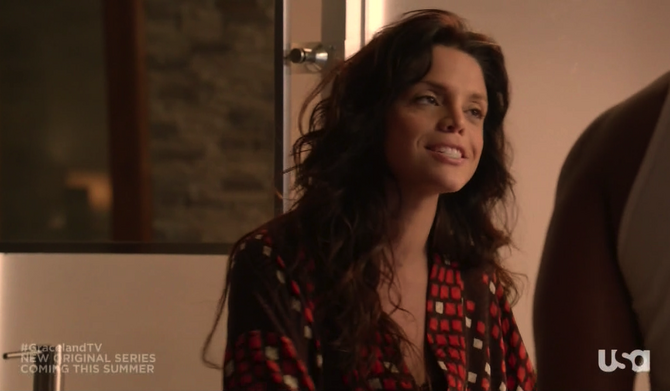 Catherine 'Charlie' DeMarco is a strong-willed FBI agent assigned to live and work in Graceland.

Background: Charlie is of Italian descent and her father was a wiseguy. Her father got into an altercation with another mob family but refused to run, so 14-year-old Charlie made an anonymous call to the FBI, leading them to find cash and other things and causing her father's imprisonment in order to keep him safe.

Charlie is a strong-willed undercover FBI agent. She's a chameleon on the job, easily turning herself into anything from a believable junkie to a classy businesswoman. Whatever her guise, she's brimming with attitude and determined to take the bad guys down.

Season 1 : It is mentioned that Charlie and Briggs were lovers during the time when they first came to Graceland. They later rekindle their passion when their they reuse the aliases they had at that time, but then agree that they have both got it out of their system.

Season 2: He calls her "Chucky" a time or two. They are back together and everyone in Graceland knows it. He gets her pregnant but tries to keep her from doing her job because of it, later she finds out that he killed Juan Badillo and she doesn't want anything to do with him. She fakes an abortion so he gets off her back and lets her do her job, thinking she's no longer pregnant. Later the baby really does die, after someone beats her up and drugs her.

season 1: Charlie already likes Mike very fast, but she seems to look after him in a motherly way.