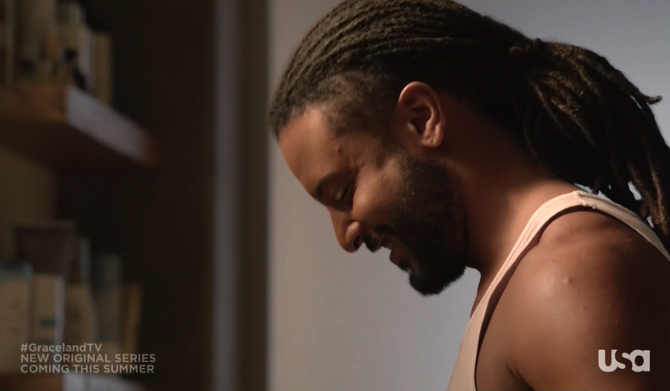 Dale "DJ" Jakes is a U.S. Customs Agent living and working in Graceland.

Dale "DJ" Jakes is a quick-tempered U.S. Customs agent. He is the most territorial of the roommates. What's his is his, and he'll make sure everyone know it. He's a tough nut to crack, but underneath his shell is a truly dedicated agent with a lot of wisdom. Jakes is a bit of a lone wolf, but he is always there to help the team when they're in need.

When he meets women, DJ uses the cover story that he is a bass player in a "band you've never heard of", that travels a lot and had never recorded an album.

Cassandra is the mother of Dale's son, Daniel. They have a tenuous relationship. Dale feels that with the life he lives working undercover it wouldn't make for a good family.

courtney: she is the last girl we see him with. They met through a fake role he played. she think he's a money laundrer. And they end up running away together in the end, where he leaves Graceland.

Johhny: they did not ike each other in the start, but later became friends. When they fight at the last scene, Dale tells Johnny that he loves him, and then leaves.

Briggs: Him and briggs has gone through many things together. Dale had killed a man and asked briggs to help him, and he did. thats why he owed him. So when Briggs killed Juan Dale had to keep it a secret, and help him. And in the last episode, he is mad at briggs and says that they are done no more favours.

Retrieved from "https://graceland.fandom.com/wiki/Dale_Jakes?oldid=6476"
Community content is available under CC-BY-SA unless otherwise noted.