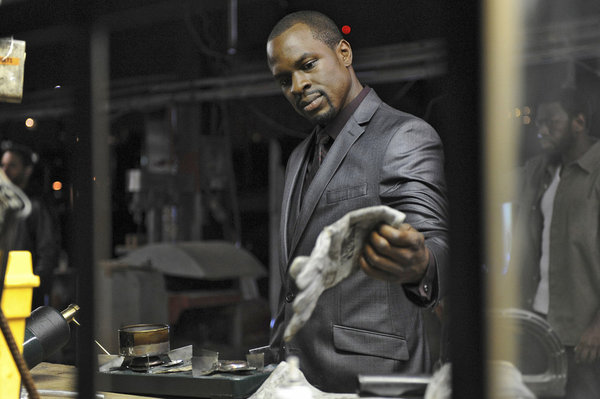 Jeremiah Bello is a major crime boss in Long Beach. He deals drugs, guns and is trying to unite street gangs in his territory. The drugs he sells are from the Caza Cartel. Bello is of Nigerian descent.

Mike and Bello start off a bit rocky as expected but over time Bello grows to trust Mike. We watch them bond over westerns and cigars. Eventually Bello hires Mike as his personal body guard.

When Bello was busted Mike, who has been stabbed by Jangle, quickly has an officer read him his rights so he can keep up his cover.

Bello is interrogated by Charlie but he says nothing.

Mike goes undercover at the prison Bello is in trying to get information. Bello sees Mike and Charlie in the visitation room. Bello than attacks Mike reopening his stitches.

Retrieved from "https://graceland.fandom.com/wiki/Jeremiah_Bello?oldid=6415"
Community content is available under CC-BY-SA unless otherwise noted.