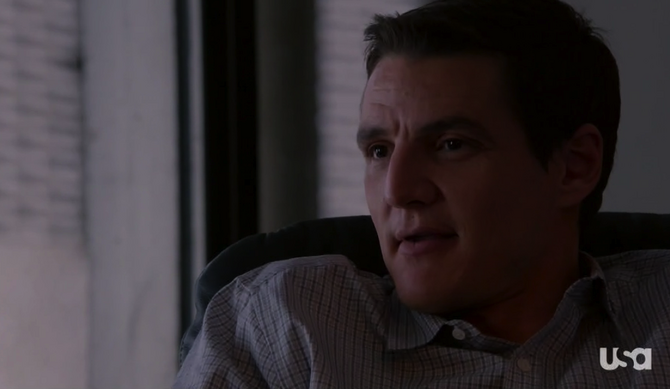 Juan Badillo was the FBI control officer for Mike Warren's investigation into Paul Briggs. While finally confronting Briggs about his suspicions, a drunken Briggs shoots and kills Badillo, who has his face covered and is wearing a set of keys to make Briggs think he is Jangles, in a short scramble. Briggs pulls down Badillo's mask and remarks that he doesn't look any different than a normal human. He drives to an unknown area and buries "Jangles" unbeknownst to him that Badillo was an FBI agent.

Juan Badillo is a tough but charming FBI agent with a rocky experience at the Bureau. Several years in as a case officer.

Mike first comes to see Juan under the pretence that Juan is a shrink and is visiting him as an "after action evaluation" due to the shooting he was involved in. During his questioning in his initial evaluation, Mike realizes that Juan is not a doctor.

Retrieved from "https://graceland.fandom.com/wiki/Juan_Badillo?oldid=6214"
Community content is available under CC-BY-SA unless otherwise noted.