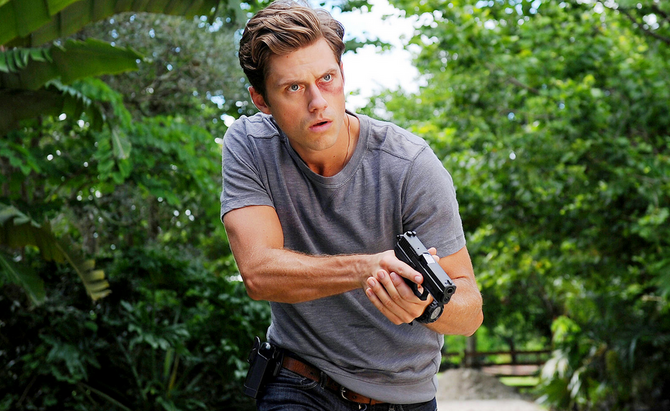 Mike Warren is a rookie FBI agent who was assigned to live and work in Graceland.

A freshly minted agent graduating at the top of his class, FBI rookie Mike Warren anticipates a traditional D.C. desk job when he’s unexpectedly shipped to Graceland. Immediately thrown into his first undercover assignment, he relies heavily on the guidance of legendary FBI agent and mentor Paul Briggs. What he doesn't have in life experience he makes up for in smarts, which he'll need to fulfill his secret mission at Graceland, one that will put him at odds with his roommates: he is there to investigate Briggs.

At the end of Season 1, Mike is transferred back to the east coast after the FBI considers his assignment to be a success. He is seen having flashbacks about Graceland, indicating that he misses the other agents. He talks on the phone with Briggs. The call ends with them talking about a possible vacation.

Season 2 opens with Mike being tortured via asphyxiation; it is revealed that he had been investigating bus lines that he suspected were smuggling drugs and/or weapons, and that he had gotten close to finding them. The bus lines, connected to the Solano cartel, lead to a human trafficking ring. He and Paige Arkin infiltrate it, Paige as a girl and Mike as a buyer. Additionally, it is discovered that the Solano's have an L.A.P.D. officer on their payroll, Sid Markham, who Mike antagonizes. When one of the girls in the ring is killed, Mike burns her body and covers up the murder so that the investigation can continue and their connection to the Solano cartel can remain intact. When Paige discovers this, she sets up a raid of the compound to free the girls and Sid almost kills Mike. Later, Sid discovers that Paige, Briggs (who had been undercover as a fellow cop), and Mike are all agents who work together. Sid and the other dirty cops attack the Solano home and Sid frames it so that he is the only survivor and it appears Mike was the gunman. Mike discovers this and is shot by Sid, and during the surgery to remove the bullet his lung collapses and he has lead poisoning. Because of Mike's coverup of Lina's murder, Paige tells Sid where he can find Mike, and Sid goes to Mike's hospital room and kills him.

In the beginning of Season 3 it is revealed that Mike was medically dead for six minutes before being resuscitated by the hospital staff. He believes that he saw something while dead: forty-seven red birds, a clock whose hands make a 'V' shape, and a forest. He becomes obsessed with these things and is convinced that they mean something, much to the frustration of his housemates. Mike also becomes addicted to prescription painkillers and then oxycontin after leaving the hospital.

He reaches his breaking point after accidentally shooting Gusti and stealing the one of the morphine injections given to him. He asks Paul for help with detoxification. Once he is clean, he begins to suspect Paul of being the person who gave Gusti the sarin gas Mike was investigating, and Mike begins investigating Paul on his own. He and Paige figure out that it was in fact Briggs, and later discover that it was an empty canister, not actual sarin gas.

Charlie gives Mike his nickname, Levi, after his first bust in which he sells "8 yards of indoor carpet" (codename for drugs) to Felix Arroyo in exchange for a trailer full of 12,000 pairs of counterfeit jeans.

A deleted scene in Season 1 reveals that Mike was diagnosed with ADHD as a child.

On Graceland: Undercover, an interactive website with backstories for each of the agents, it is revealed that Mike was abused as a child by his alcoholic father. He was given a gun by his mother's father for protection, which he eventually learned to use with near perfect precision.

The first time Mike meets a woman, he tells her that he is a golfer trying to make it on the PGA tour, but is making ends meet by teaching privately. Unfortunately, that woman's father was a golfer.

They are great friends and have a brotherly relationship. Johnny cares for Mike even though he's being a bit sarcastic or silly. Mike even cried when he thought Johnny was dead.

Season 1: Mike is initially sent to Graceland to investigate Paul Briggs, who is believed by the bureau to be skimming heroin. Mike finds out that Briggs is a former heroin addict and has been skimming and selling heroin under the alias Odin Rossi in his attempt to track down Jangles, the Caza torturer who got Briggs addicted to heroin and killed his former team.

Season 1: Mike's (now ex) girlfriend. They met at The Drop. She is from Baltimore, Maryland. She went to school at Wellesley College and Georgetown Law. She moved to the west coast for the summer to take a break from school and life before she "gets locked in an office forever".

When they starts dating, Johnny and Paige tell her that Mike is a pilot. They warn him that he can not get too close to her and tell him to break. Mike decides not to after getting unexpected advice from Dale.

At one point, Paige had to steal Abby's phone and Mike dropped it in a glass of water after she used it to take a picture of him to prevent his picture from going on the internet. One day, Mike brought Abby to Graceland, and brought her upstairs, despite being told nobody without a badge is allowed on the second level. While there, Abby saw Paige with her gun in the hallway. Paige tells her that her dad makes her keep it for protection. However, as Abby grabs her sweater off the counter, Mike's gun is revealed. They said they had them for protection. Unsatisfied with the reason that they both owned one for protection, Abby demanded the truth from Mike. When Mike did not say anything, she broke up with him and left.

Season 1: Paige sets Mike up with Abby in the hopes of Mike having a fun time. When he begins developing a relationship with Abby, she tells him to break it off because no one in Graceland is allowed to have serious long-term relationships with anyone outside the government. In the last few episodes, the other roommates seem to believe that there is something more to Paige and Mike (Briggs, Johnny and Jakes all make comments about it). In the finale, Paige and Mike kiss, but she thinks it's not really about her and leaves. At the end of the episode she makes a toast to Mike's return to DC.

Season 2: When Mike returns to Graceland, he maintains a sexual relationship with Paige, despite also being in a relationship with Jessica. Paige at one point attempts to coerce Mike into sleeping with Jessica so she would approve something for their mission; Paige tells him to "do whatever he has to do" to "convince" Jessica, but he can't go through with it and ends his relationship with her. Paige and Mike's sexual relationship ends as well. Later, once Paige is removed from Sulla's compound, she blames Mike for not saving Lina, another girl. She finds out that Mike covered up Lina's murder and has Sid Markham try to kill Mike, who fails. After Mike is shot, though, Paige tells Sid where he can find Mike, and Sid succeeds in killing him.

Season 3: Paige feels guilty about almost getting Mike killed, and has trouble facing him. When Mike is obsessed with the red birds, Briggs, and the Sarin gas, she initially is annoyed but comes to help him.

Mike first meets Charlie on his first day of Graceland. He thought she was a junkie trying to break in, which led to both agents drawing their weapons. Soon after, Charlie started taking a liking to Mike, treating him like a little brother. Mike also started helping Charlie when nobody else would, such as going back undercover in prison, despite having a stab wound.

Charlie continued to defend Mike, even when it was revealed that the only reason he was in Graceland was to investigate Briggs, when nobody else could even look at Mike.

Season 2: She works with Mike at his D.C. job. Mike is seen in bed with her in season 2 episode 1. She claimed she thought they were just having fun. She looks out for him and helps him out very often. After Paige attempts to make Mike sleep with Jessica in H-A-Double-P-Y in order to get something for their mission, Jessica leaves and returns to D.C. 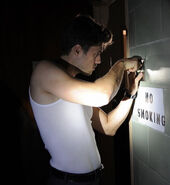 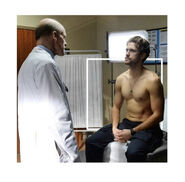 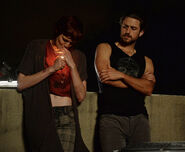 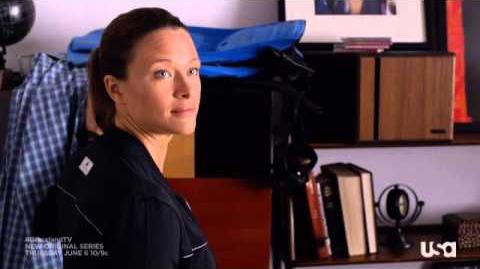