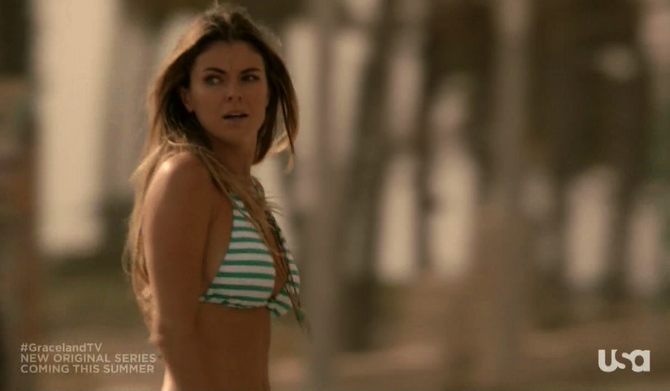 Paige Arkin is a DEA Agent living and working in Graceand.

Paige Arkin is a smart and sexy DEA undercover agent with a smile that lights up the room and a killer left-hook. She drinks hard, plays hard and isn't afraid to get her hands dirty. She'll do whatever it takes to arrest the enemy and after she has them in cuffs, she uses her talents for ballbusting to make even the hardest criminal cooperate. She also uses her friends and is a toxic person trying to kill Mike and in turn getting him addicted to drugs messing Mike up for life so she can burn.

Paige and Mike have had a flirty relationship from the first episode. However, this relationship becomes comprimised by Mike's relationship with Abby, whom Paige set him up with. It was unintentional that they became a couple, Paige thought it would be a hookup but nothing more. All throughout his relationship with Abby, she tells him that they shouldn't be together because Abby could find out about Mike being a FBI agent. She proves to be right in the end and Abby and Mike break up a few episodes later. In the last couple episodes, the other roommates seem to believe that there is something more to Paige and Mike (Briggs, Johnny and Jakes make comments about it during the last 3 episodes). In the season 1 finale Paige and Mike kiss but she thinks it's not really about her and she leaves. At the end of the episode she makes a toast to Mike's return to DC. In a flashback from Mike in the end, he reflects on his time at Graceland and remembers a time where Paige and him were playing football with Johnny and he tackles her.

in season 2 they sleep together and have a secret relationship, behind the others back. until Mike didn't help her with her sex trafficking case, and she almost got him killed, by telling sid where his location was. she was then very annoyed with him after, and in the end they are just friends

Retrieved from "https://graceland.fandom.com/wiki/Paige_Arkin?oldid=6474"
Community content is available under CC-BY-SA unless otherwise noted.