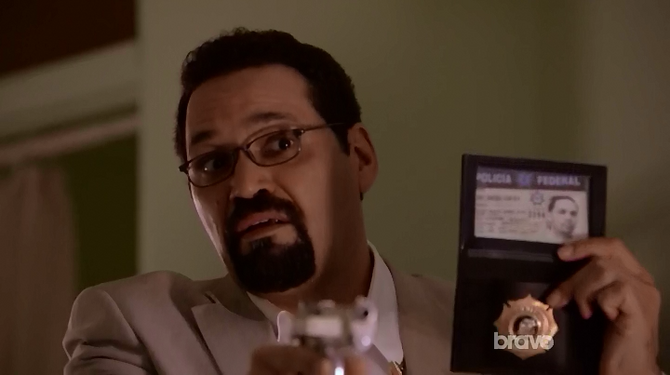 Rafael Cortes was a member of the Mexican Federal Police. He was also the serial mass murderer known as Jangles.

Jangles was a serial mass murderer affiliated with the Caza Cartel. At first no one knew what he looked like, but at his murders, people heard the jangling of keys. He was also known as "El Hombre Llave" or "The Key Man". The FBI gave him the name "Jangles".

Jangles attacked Bello's safe house, killed undercover agents, Bello's men and Mike found him torturing Bello. He was stopped by Mike but stabbed him in the ribcage and then got shot in the shoulder by Briggs.

That night Charlie went to dinner with Mexican Federale Rafael Cortes. During the night, the camera showed the back of his shoulder, which had a bullet hole in it where Briggs shot him, indicating that he, unbeknownst to Charlie, was Jangles.

After Briggs went on the run, Cortes had lunch with Charlie and decided he was leaving to return home that night. He invited Charlie to come back to his vacation house, but Charlie kindly declined.

When he returned to his home, Cortes put his bag down on the counter and went upstairs to freshen up. What he didn't realize was that Paul Briggs, who was catching onto him, followed him to his home. While Cortes was upstairs, Briggs went through the Federale's bag and found a large set of keys, confirming that the man was, in fact, Jangles.

Jangles is the man who, instead of killing him, helped Briggs become addicted to heroin.

Retrieved from "https://graceland.fandom.com/wiki/Rafael_Cortes?oldid=6101"
Community content is available under CC-BY-SA unless otherwise noted.