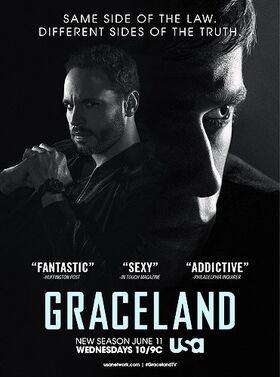 Season 2 of Graceland was announced on September 10, 2013. It is scheduled to air on June 11, 2014 on USA Network, having been moved to the 10/9pm time slot on Wednesday nights, following Suits.

The sophomore season of Graceland follows the high-stakes investigative lives of six undercover federal agents who live together in a government-seized Southern California beachfront house. These FBI, DEA and ICE agents, whose lies are their lives, struggle to maintain a sense of normalcy. This is especially challenging when the former FBI rookie, Mike Warren returns to ‘Graceland’ to run point on a dangerous mission against the cartel. Meanwhile, Briggs, still concerned about the missing recording that implicates him in a murder, attempts to clean up his life and repair his relationships.

Retrieved from "https://graceland.fandom.com/wiki/Season_2?oldid=6431"
Community content is available under CC-BY-SA unless otherwise noted.